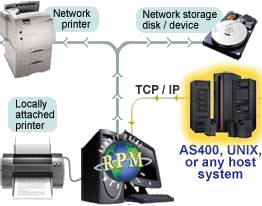 RPM Remote Print Manager® ("RPM") Elite Print Server is the only complete solution supporting LPD and stream protocols that enable users to receive and customize print jobs from any AS/400, mainframe, UNIX, or Windows-based system to any Windows printer - locally or remotely. RPM Elite is built to work seamlessly and run as a system service within environments for Windows 2008 and beyond.

While many print servers only allow a straight pass-through of data from the host system, RPM provides extensive formatting capabilities in text printing, and the ability to work with third-party software.

Designed for Windows 2008 and beyond

Originally designed for Windows 2000 with backward compatibility for Windows NT, RPM Elite has been enhanced and updated to include support for all Windows NT-based platforms, including Windows 2008, Windows 8 and 8.1, Windows 10. RPM Elite installs at the kernel level and runs as a native service.

Initially, RPM Elite supports 99 printers but this limit can be increased up to unlimited. There is no limit on the number of print queues; the limit refers to the number of Windows printers. Note that filter actions do not use printers.

The redesigned license manager has been implemented to enhance ease of use. A license Wizard guides users through a simple, step-by-step process to unlock the software and any installed modules, such as an increased number of printers. License manager allows unassisted reinstallation by generating the same serial number each time it is installed. Web-unlock can now connect through a proxy server/firewall using existing proxy server configuration, or if needed, a separate proxy server configuration is also provided.

RPM Elite is fully integrated with Windows security. System administrators can control access to RPM through the "DCOM Configuration" utility in Windows. Configuration changes can be controlled using the Windows Registry (Regedt32.exe) and incoming print jobs can be secured with the NTFS file system.

To facilitate custom integration with other applications, RPM Elite provides an external COM interface to give integrators unlimited customizing possibilities. Using this interface, developers can create applications to perform additional processing on print data. Interfaces are also provided so that events and job status can be passed back to RPM.