UNIX Printing to Windows with RPM 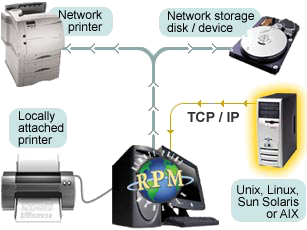 Easily format your UNIX spool files with RPM (Windows UNIX print services) before they are sent to your Windows-attached printer! Easily add a printer to UNIX with RPM and instantly be able to format your UNIX print jobs, set duplexing, stapling, and any other copier or printer commands. RPM provides the ability to take any UNIX spool file and save it to disk, whether it's saving the file to your local disk or saving it to a network storage device.

Print to Windows (local or networked) printers versus printing to mainframe printers.

Control Fonts and other Finishing Functions

RPM gives users the ability to control fonts with dynamic sizing using lines-per-inch and characters-per-inch. Any text data stream can be formatted for a Windows printer whether the printer is supported by UNIX or not!

Save to Disk or Integrate 3rd party software

The print job is captured to process with an application or saved to a file (file transfer) for archiving or other purposes. RPM checks for duplicate filenames before saving and has many file naming options. RPM can be configured to open print data in other applications such as word processors, spreadsheets, or other programs.

RPM passes raw information from the UNIX system to the PC print queue bypassing the Windows print driver. RPM processes print data without modification as if the printer were connected directly to the host system through a parallel or serial connection. This print action supports the advanced queue features such as transforming data, adding and appending bytes or a file, etc.

UNIX Printing Is Easy with RPM

RPM will boost your UNIX printing in many ways. Some of the common UNIX searches we see are: remove a print queue in UNIX, setting up printer daemons in UNIX, how to cancel UNIX print, UNIX printing in Windows 98, remote printer maintenance UNIX, stop printing banner sheet AIX, change printer destination UNIX, and more... RPM can help out with all of these, for half the cost and no maintenance.

UNIX print jobs now have access to advanced functions of our printer, without additional hardware.

Using RPM, printed output has been decreased by over 60% and important documents are placed in electronic archives. In addition, routine printing has been automated.